Brandon Vickerd’s current show at Art Mûr brings together three sculptural pieces that undress and re-situate the Chopper: that iconic assertion of individuality, masculinity, and speed, pushed to new levels through mechanical re-imagining. Biker culture itself is something of a hidden universe for the uninitiated, and yet it’s omnipresent in the badass archetypes that have never really left the Hollywood screen. The mechanic’s shop now shares that space, too, with TV shows like American Chopper reinforcing what Vickerd sees as a current reverence for hyper craftsmanship, in a society that is quickly losing the need or will to continue to create by hand.

The Chopper series has come out of years of training in custom bike shops, where Vickerd learned the new materials and processes from masters of the craft. The style is clearly automotive; its exoskeletal form mimics the exposed mechanics of motorcycles. There is that shared technique, a precise handling of steel, fibreglass, and car paint. But otherwise they are abstracted out of mechanical use or recognition. Chopper 1 captures the exaggerated length of its namesake. The piercing length and height of the piece stretches its physical reach, to the corners of the room. The work is supported by a stylized kickstand, re-enforcing its top-down direction. Chopper 2 is tight and muscular – engine-like – buzzing with pent-up energy, and the promise of propulsion. Chopper 3, less contained, seems ready to fly to pieces. As art objects, they are striking. As machines, they are decommissioned. These works’ promise of speed, agility, and rebellion are locked away as wayward desires. But brought together in this space, they seem poised and ready to use their audience as grounders to come alive.

The un-crowded installation allows the necessary space for visitors to negotiate their relationship to the objects and the physical surroundings. This acknowledgement of relationship – between person, architecture, and objects – in Chopper’s sparse installation has a 60’s minimalist sensitivity. At the same time the sculptures themselves have the aftertaste of an old future. In the gleaming (and maybe just a bit rusty) hardness of these chrome bodies is the faint reflection of the failed project of futurists and utopian dreamers. Chopper brings visitors into a more intimate proximity with their environment – both physical and cultural. As with Dead Astronaut (2008), Vickerd brings predominant cultural fascinations to eye level, distilling both their appeal and true disconnect from our often monumental expectations. 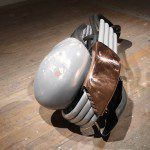